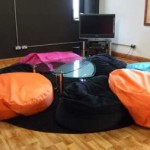 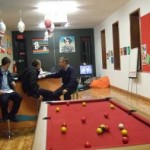 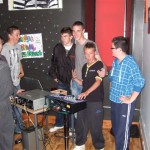 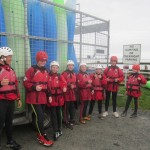 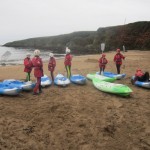 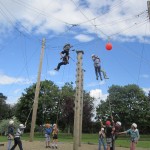 Membership:  FUSION Youth Café is open to all young people aged 13-18 years from the catchment area of South West Wexford. Young people are requested to complete a membership form for FUSION Youth Café which captures their basic information required for contact and also details required in case of emergency.

Our Café is a drop-in service for young people and supervision is only provided while young people are in attendance at the Café. We encourage young people to be responsible for their own conduct and behaviour at all times.

The Café operates a strict No Drugs and Alcohol Policy. If a staff member deems that a young person is under the influence of alcohol or drugs they will not be admitted to FUSION Youth Café  and their parents/guardians and or the Gardai may be notified immediately.

Currently members are enjoying general socialising and chillaxing through the comfortable and welcoming facilities available…(try the Fat Boys for comfort!!!) and watching movies playing Pool and Wii which are available to all. We have just installed a new PC for supervised FREE internet use.

As well as planned events fusion staff has covered a lot of issue based topics affecting young people. Issues that have arisen and that have been explored with young people have included

As part of the Autumn/Winter Programme Fusion youth Café developed a series of workshops on health promotion which included talks on Healthy Eating, Smoking cessation , Exercise classes designed for teenagers, cycling event and keeping safe when out at night.

One off Activities offered by fusion during 2014 there was new membership by 44 males and 27 females to Fusion Youth Café. These extra activities are :

A Fancy-Dress Halloween Disco was held again this year. One aim of the event was to raise funds for the Projects Counselling service, but it was also to develop the profile of the project within the community. 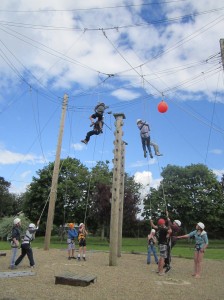 During July and August 2014 the Level Up pilot project was launched which was the first project of its kind in County Wexford and tested the theory of using technology, digital skill development and gaming to combat social inclusion and rural isolation. The project was devised by Roisin Markham in conjunction with education and development coordinator Jane McWilliams. Over the course of the 12 weeks the group learned so much from the guest speakers, the Tutor and each other.   The group learnt new skills in all of the above and made connections and contacts with people in the Tech industry.  One person went onto to college in England studying technologies.