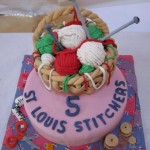 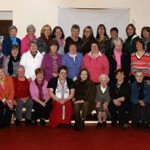 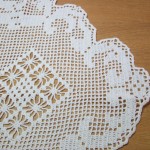 The St. Louis Stitchers currently have 50 registered members in their group.  They continue to meet weekly with up to 30 people at each session.  The skills of the members are highlighted throughout the year with examples of beautifully made crochet and knitted garments.  Other crafts in evidence to date include such as embroidery, various types of needle run lace, bobbin lace, jewellery, amazing handbags and more.

There are currently 50 names on the register, however, attendance has been down to 25-30 members coming each week.

For the last few weeks of 2014 attendance has been reduced further with only 15-20 members attending.  Despite this, the members continue to produce intricate and stunning pieces of needlework.

Some examples of the groups work are wool crochet, fine cotton Irish crochet, cross stitch, tatting, knitting, beading, quilting and embroidery.  One of the members made 2 beautiful beaded and crocheted wedding ring cushions and another member a quilt 100% made from recycled materials.

2014 Committee elected at the AGM on 22nd January

SLS Secretary elected as the Convenor, New Ross Area Coummunity Forum in February and nominated by the County Wexford Community Forum as a member of the newly formed Local Community and Development Committee (LCDC) in May.

Six members of the group attended a Women’s Little Christmas event in Kinsale organised by Veronica Stuart, chairperson of the Traditional Lacemakers of Ireland.  The evening started with a champagne reception and dinner followed by an antique lace fashion show.  The fashion items ranged from some having been rescued from rubbish skips to those purchased in various parts of the world.  All the items had been collected by and restored to their original delicate fine quality by the traditional lacemaking group.  The next morning there were a series of workshops covering the many varied forms of Irish lace.  A good time was had by all.

Replica of the Helen Blake

The weekend of 22 – 23 February commemorated the 100 year anniversary of the Helen Blake tragedy.  The Helen Blake was an Irish lifeboat based at Fethard on Sea.  While attempting to rescue the crew of the Norwegian schooner Mexico in February 1914, the Helen Blake was lost with nine lives. Relatives of some of these men still live in Fethard.  Following the commemoration ceremonies, a local committee was set up to organise the building of a replica of the Helen Blake.  SLS have been asked by this committee to make a commemorative piece to be put on permanent exhibition.  Additionally SLS were invited to submit some garments made 100% from recycled materials to the Trashing Fashion fundraising event.

SLS Chairperson was nominated by her daughter for the Women’s Way 2014 Mam of the Year.  She was shortlisted as 1 of 3 finalists in Leinster.  Unfortunately she did not win the Leinster title; however, she is the St Louis Stitchers Mam of the year!

At the beginning of May, SLS Chairperson had a visit from Marie Laurie, from Australia.  Following a visit to Borris House by Marie and Annette Meldrum in 2006, the 2 women decided to investigate the possibilty of cataloguing and publishing the history of the almost completely unknown collection of Borris antique lace.   Marie and Annette were successful in getting funding from the Australian Government to catalogue and document the Borris Lace Collection; the book The Borris Lace Collection also written by Marie and Annette was published in August 2010.  Marie gave the chairperson some examples of lace that had made and the chair said she would photograph and share them with the group.   Marie said she will return to Ireland next year and will hopefully meet SLS chairperson again to maintain the contact.  Linked to Marie and Annette’s involvement in cataloguing and documenting the Borris Lace collection there had been previous meetings with Grainne Doran, County Wexford Archivist, regarding the cataloguing and documenting of the New Ross Lace collection held at Mount Carmel.

Some of the members went to a specialist craft and needlework shop in Clonmel in June.  In November members went on the annual pilgrimage to the Knitting & Stitching Show at the RDS.

The group was awarded €400 from the Community Forum to buy heaters for the activity room.

The group rounded 2014 off by holding a party before breaking up for the Christmas Holiday.