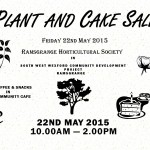 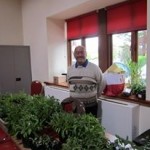 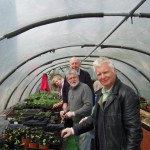 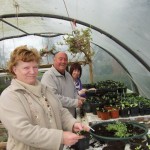 The RHS is a voluntary non profit making community group.  Its principal focus is horticulture but it also provides an important  educational, recreational and social focus for members of the community who wish to develop or increase their interest in gardening.The RHS operates mainly in the polytunnel in the grounds of SWWCDG and it has access to an adjoining plot of ground owned by the St Louis Order which it has developed for horticultural purposes.

The  RHS has a currant membership of 23   The Officers are

The customary practice of the RHS is to have formal meetings indoors in the CDP premises when required – in recent times these were held in the Fusion Cafe or the Boardroom.  Indoor meetings at the CDP during 2014 were held on 26th February and 19th March.    The AGM of the Society was this year held in the Strand Bar, Duncannon on 29th January, 2014.This is in addition to meetings at the polytunnel where the members come together each Wednesday (more frequently on occasion) to carry out horticultural related work during the active horticulture season.  As indicated last year, it is difficult to be precise, given that the frequency of meetings is related to the activity of the horticultural group, which varies from time to time,  but, as a general rule, it is envisaged that the requirement for indoor meetings of the RHS for the remainder of 2014 will normally be on the basis of one Wednesday per month and that the same will apply in 2015.    The customary practice is that the actual date of the next meeting is dependent on what is happening and is booked on conclusion of the previous meeting.

The principal horticultural activities of the RHS, by their nature, are seasonal and are repeated each year. Essentially, they consist of preparing the ground (with all that entails in terms of digging, removing stones and weeds, fertilising the soil, filling pots and trays with compost), taking cuttings, sowing seeds, and planting seedlings and ongoing oversight of growth (continuous weeding and protection of growing plants from cold and from disease, etc.) and ultimate harvesting of vegetables and fruit and the production of excellent displays of  flowers and shrubs.  The planting times vary in horticulture with, for example, some varieties of plants and bulbs requiring planting in the fall, others in winter and others in spring and, in the case of vegetables, there is also a need for crop rotation so these activities continue throughout the year in one form or other

A great deal of time and effort is spent by members each year in preparing for and organizing the vegetable produce and flowers and shrubs for the annual plant sale which, along with a cake sale, is held in the Community Hall each year  – held this year  in May.   Produce which is not used is made available to members and to CDP staff.   The polytunnel is usually empty after the plant sale and the process of preparing for replanting then recommences for the next year.

The continued development of the new plot is an ongoing major project.   This entailed last year the preparation of the ground, the erection of fences and gates, the laying of paths and the construction of preparation of raised beds for growing purposes. Vegetables and fruit have been planted and the plot is now fully in operation and is a very beneficial addition to the activities of the group.

There is an important educational aspect, both theoretical and practical, to the work of the group and horticulture videos are regularly shown at meetings during winter months.   Training sessions have also been held with Horticultural experts in this regard. A number of group members were encouraged to and are now participating in the second year of a two year Horticulture Level IV FETAC course being run by Ramsgrange Community College.

The RHS arranges visits by members (at their own expense) each year to various centres of horticultural excellence and this, in addition to the educational aspect, is very important from  a social and recreational perspective.    The organised visits in 2014 to date were to the Coolaught and Beechdale Garden Centres.   Further visits will be organised shortly.

The RHS continues to provide floral displays for the Community Cafe and for the adjoining Day Care Centre.  The society also provided plants for the SWWCDG car boot sale on 11th May, 2014 held to raise funds for the crèche.

The RHS is funded through annual  membership fees (€10 ) and through the proceeds of the annual plant and cake sale, which this year raised approximately €1,200 after discharging sale expenses. The money received each year is used to defray  ongoing horticultural expenses.

The society welcomes the continuing support received from SWWCDG during 2014 and wishes, in particular, to thank the Administrator, Ann Rice for her assistance in this regard.

The RHS would welcome any further help or support which SWWCDG could give in terms of direct financial support or advice on the possible availability of funding.